Edwina Rogers Controversy, or How the secular movement is alienating Republicans, libertarians, moderates, and independents

Well, there’s plenty of controversy in the secularism movement this week due to the hiring of Edwina Rogers as the new executive director of the Secular Coalition for America (read about this from the CFI, in an interview with ER, and another with Roy Speckhardt, and finally the opinion of Matt Dillahunty (there are additional links in his post). She’s a Republican *gasp*. Oh wait, I don’t really care that she’s a Republican.

Then there’s everyone’s issue with her “sudden” departure from Republican lobbying into the realm of secular lobbying. From people complaining that they don’t know if she’s really a nontheist to people complaining that Rogers doesn’t seem super-duper-extra honest and cuddly. Guess what: she’s a lobbyist. Did you seriously think lobbyists come off as not slimy? Because there were many occasions when I found the last executive director of the Secular Coalition to be rather slimy, and he generally fit the profile of what people seem to want.

Don’t forget the whole Republican platform problem. Let me ask you, do you agree with every statement in your party’s platform? Do you know how those platforms are written and decided on?

Can you tell me how allying yourself with a political party is a reasonable thing to do? Wouldn’t trying to remain apart from political parties be a more effective method to stay reasonable?

Finally, do you think all the authors of these anti-Edwina comments realize just how alienating they are being? Not just to Republican atheists, but libertarian nonbelievers as well as independents? We might not be a majority, we might not be vocal, but w are there, and our support is important.

I didn’t actually expect to write this post. It just came out, I guess. I opened a new post to make a joke about this screen shot of an old Fox News video: 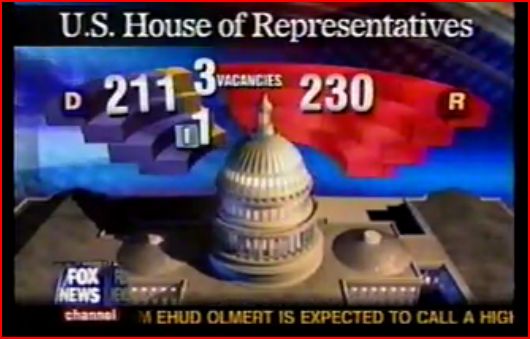 Why does 230 look so much larger than 211? Was Fox trying to trick people into thinking there was more Republican control than there actually was? Talk about manipulating visual representation of data!

6 thoughts on “Edwina Rogers Controversy, or How the secular movement is alienating Republicans, libertarians, moderates, and independents”