Bogs, a marsh, a gorge, and a lot of sunsets.

I spent last weekend in northern Minnesota, which is full of pine trees, exposed bedrock, rivers, and the hilly remains of an ancient mountain range. My family owns some land and a cabin on Lake Vermilion near Cook, MN (the lake itself is rather large, when I say close to Cook, I mean the land we own is close to Cook).

I’ve been going on vacation there all of my life. It’s a beautiful place, but lately I’ve felt a desire to explore the area a bit more. With the help of a hiking guide my mom and I visited the Bog Walk (also this link and this link) right outside of Orr, MN (also close to the Vince Shute Wildlife Sanctuary, a fantastic place to see cuddly-looking black bears) and the Vermilion Gorge Trail.

The Bog Walk wasn’t very long, but whoever wrote the informative signs did a stellar job. Most informative signs are written rather poorly – they convey enough information, but don’t capture the reader’s attention. Somehow, the author of the Bog Walk signs managed to capture my attention and make bogs interesting. Did you know there are insectivorous plants (several different species) in the northern woods of Minnesota? Or that bog water is acidic while marshes are not? Or that there is a plant that grows in bogs that you can use to make tea, and the presence of this plant actually means much of bog water is essentially weak tea? Okay, I’m done.

The Bog Walk is an easy 1/2 mile floating wooden boardwalk through 3-6 different types of wetlands (depending on the source; the bog walk itself lists 4). Unfortunately, flowers bloom a bit later that far north in Minnesota, so we missed out on seeing any blooming flowers or insectivorous plants. Photos: 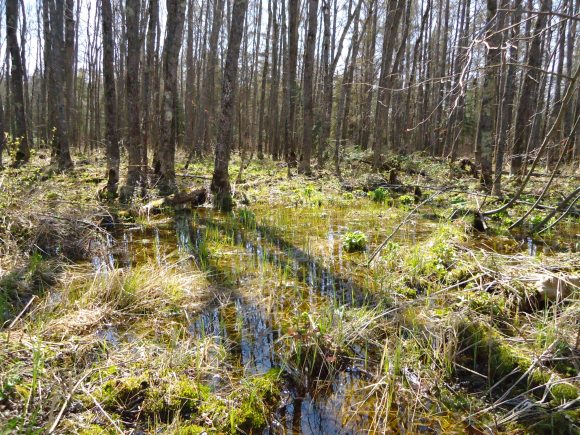 A photo of one type of bog.

You can’t really tell here, but this root system was huge. Several trees fell over together and pulled up their root system, possibly in the recent snow storm (a week before this was taken they got about a foot of snow that melted almost immediately; there were downed trees all over the place). 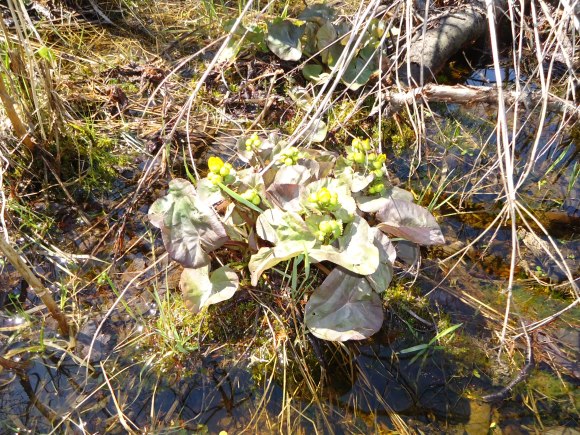 This is one of the plants in the bog. I imagine in just a few weeks it’ll be blooming.

After the Bog Walk, we visited the Vermilion Gorge Trail. The trailhead was difficult to find, perhaps due to the fact that the area in front of it was being used as a shipyard for houseboats. We found the trail with the help of a local. Because of the recent snowstorm, there were a lot of fallen trees on the path. We had to get creative at times. Signs along the way detailed the history of the area, notably the voyageurs, miners, and the site of an old trading post. At first the Vermilion River appears peaceful, but the Gorge itself was raging.

These were one of the several sets of stairs along the trail. My favorite steps were those made with the naturally occurring rock and exposed bedrock (not pictured).

The Gorge itself isn’t the only beautiful feature of the trail. There were stands of red pines along the way along with a lot of exposed bedrock.

The closer you get to the Gorge, the higher up the trail goes. There are many “look-outs” along the way.

It is impossible to capture the beauty and awesomeness of the Vermilion Gorge on camera – especially with a little point-and-shoot like mine. I’d recommend actually visiting. As my mom and I moved further upstream along the gorge, we discussed kayaking the river. We started out thinking it’d be a little frightening; with each new view of the rapids through the gorge we became more and more timid. We ended up saying we’d probably never try to kayak through the gorge because the rapids were that intense. Perhaps they calm down in the summer.

This is a view of the Gorge looking downstream. Fun fact: the Vermilion River flows north (from Vermilion to Crane Lake).

I spent a lot of time taking photos of the sunset, dusk and the bay my cabin is on. I wish I had taken more photos of my family, and I wish I had taken my camera when we hiked part of the Laurentian Divide on Sunday. I would’ve taken a photo of the awesome view from the top of Lookout Mountain.

Enjoy the rest of my photos! 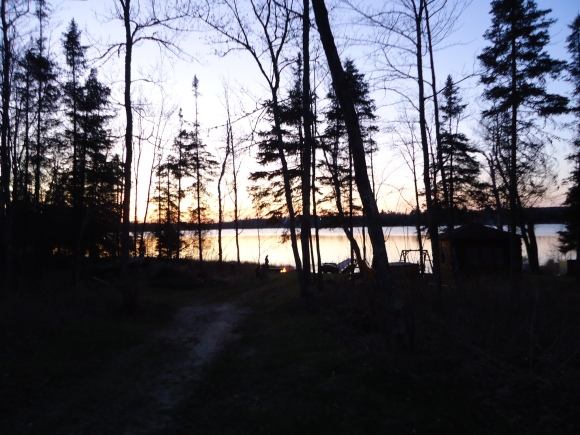 Sunset through the trees.

Sunset on the bay. 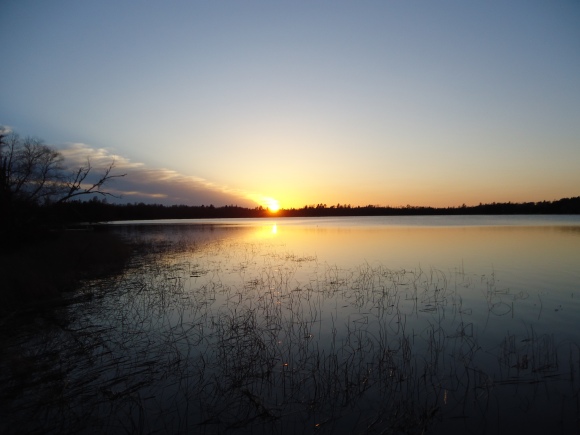 A little while later… 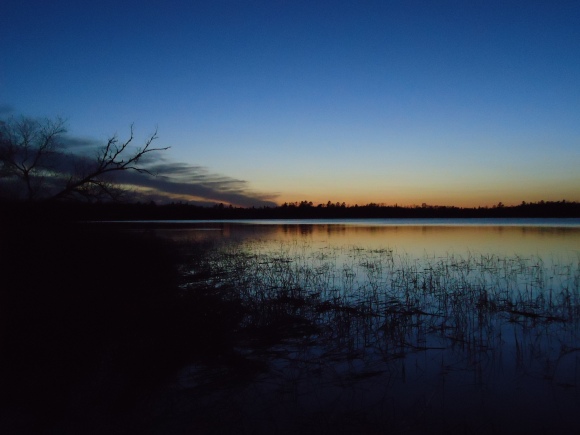 Dusk. I just love the colors and can’t stop myself from taking a lot of photos. (I’ll just throw out there that I didn’t enhance this one at all)

I see the colors and I can’t resist.

Even facing away from the sun the colors are gorgeous.

Okay, that’s the last from the same evening, I promise.

This time it was the clouds, not the colors, that made me snap a photo. And the reflective quality of the water.

Blue. It was so blue. 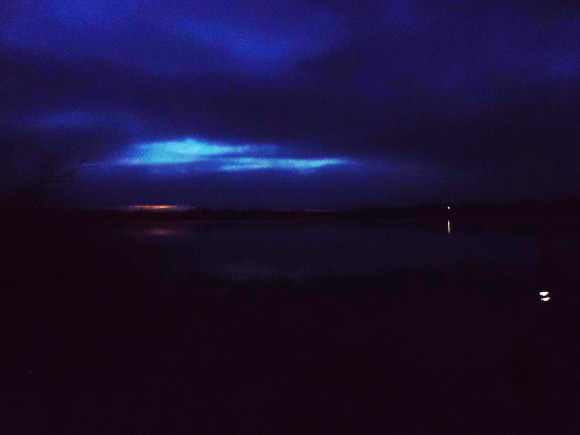 I’m ending on this one. It’s always a little strange when the camera can’t see what you can see. There was plenty of light for the human eye, giving everything a dusky blue quality, but the camera couldn’t pick that up. I had to change the contrast, brightness and saturation to get this much detail showing. Still makes for a pretty cool photo, but it wasn’t what I wanted to capture.